Most undergraduate students in the Health Promotion and Disease Prevention Studies (HP 300) section are on the pre-med track. Their schedules are mainly comprised of science courses as they pursue careers in the healthcare industry. Yet, David Black, PhD, Associate Professor at the Department of Population and Public Health Sciences of Keck School of Medicine believes there is an opportunity for classes like his to cross disciplines into the arts and collaborate with other schools at USC.

“Our Health Promotion students often focus most of their attention on STEM content, but they can further benefit from arts-based courses, which can reveal more varied ways of expressing oneself in personal and professional encounters,’ suggests Black.

Black includes experiential learning in each of his classes to create engaging lessons for his students. His module on ‘behavior repertoire,’ which explores the constellation of actions a person can perform, sparked the idea to utilize dance movements to teach the concept. He reached out to Jesus ‘Jay’ Fuentes, a lecturer at USC Glorya Kauffman School of Dance who teaches one of USC’s ‘most popular’ classes—Dance 188: International Style Ballroom Dance. Fuentes is an accomplished performer in the entertainment field whose work includes iconic dance films such as Dirty Dancing and Newsies.

Black and Fuentes partnered up to teach the students about gross motor behavior (skills which require whole body movements) through performative art. Fuentes introduced the students to the foundational box step, a basic formation named after the pattern it creates on the floor. This technique is used in various ballroom dances including the waltz and rumba. He gracefully demonstrated the sequence with impeccable posture, giving the impression of mastery with ease. However, this beginner dance routine offered the student’s a first-hand encounter of the finnicky nature of attempting to perform a novel behavior.

“In their future career, many of our Health Promotion students will ask their patients to change a behavior such as smoking, diet, exercise, or medication adherence” explains Black. His lessons underscore that all new skills take practice. The giggles, frustrations and four-step movements of the dance were examples of elements of a person’s behavioral repertoire, imparting a reminder that learning new behaviors is not always simple.

“The study of human behavior requires an in-depth investigation of the organism, the stimuli, and the reinforcement of behavior” advises Black. His class went further to provide a stimulating activity for students to critically think about all the behaviors that go into adherence. A senior in Health Promotion and Disease Prevention track mentioned that “it was refreshing to attempt to learn and understand a new skill, but much more practice would be required to add this to an existing repertoire of behavior. The collaborative class was a great way to learn beyond a book or lecture.”

Black’s approach struck a chord with his class. They were able to draw parallels between behaviors required for adherence and mastering a new skill through dance. “Today’s lesson was so much fun, it was encouraging to see how much two subjects, Health Promotion and Dance, are related and how much deliberate attention is required to master a new behavior,” a junior observed.

The merger of the arts and sciences reinforces curricula in an exciting and memorable manner. It also gives Health Promotion students a chance to experience classes beyond their conventional purview. One student remarked “I highly recommend HP 300 to any student who is interested in learning nuanced themes of human behavior. I have not taken Professor Fuentes’ class, but I will be looking into it after this lesson!”

Dramatic change from pandemic brought on stress for mothers 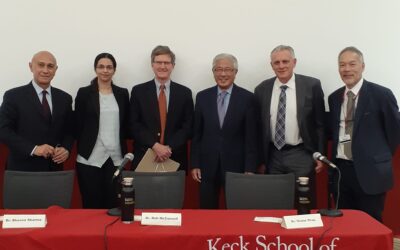 “We want to provide better care to our patients, but healthcare is a big contributor to carbon emissions that adversely impact the health of people as well as the planet, so why not change the way we practice?” ~Victor Dzau, MD The U.S. health care system is one of...