Biostatistics student takes next step to achieve his dream

Biostatistics student Dixin Shen dreams of becoming a statistician. And receiving his master’s degree this week will propel him one step closer to that goal.

After working on clinical trials for the pharmaceutical industry, Shen knew he wanted to dedicate his career to biomedical research. He is passionate about applying statistical science to human health and disease—with the goal of advancing public health.

With his master’s studies behind him Shen will continue on as a doctoral biostatistics candidate in the Department of Population and Public Health Sciences at the Keck School of Medicine of USC. He considers his academic success, and subsequent admission to the Ph.D. program, his greatest achievements so far at USC.

“One important thing I’ve learned during the program is to express scientific points accurately through discussions and presentations,” he said.

In April he put that lesson to the test. Shen and biostatistics doctoral students Zhongjie “Terry” Cai and Khang “Ken” Chau, along with advisor Meredith Franklin, assistant professor of preventive medicine, participated in an international statistical analysis competition. The team ranked among the top three presentations. Using data from the Fatality Analysis Reporting System and Caltrans, the students assessed the risk of drivers dying in severe traffic accidents when traveling below or above average traffic speed.

As Shen prepares for his next phase of research and training in biostatistics theory and methodology, he gives this advice to future graduates: “Know what you want, and fight for it.” 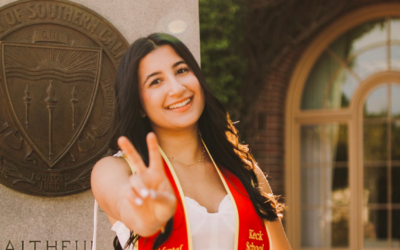